Comix Zone is a 1995arcade-style beat ’em upvideo game, originally released as a Sega Genesis exclusive. An unusual feature of the game is that it is set within the panels of a comic book with dialogue rendered within talk bubbles and sprites and backgrounds possessing the bright colours and dynamic drawing style favoured by superhero comics. This style had been used in video games previously, but Comix Zone stretched the idea to such an extent that Sega applied for and were granted a patent for a “Videogame system for creating a simulated comic book game

Comix Zone is an action platformer in which players control Sketch as he progresses through panels of his comic book, hoping to reach the end and escape before his own creations finish him off. Each level consists of two pages and secrets are discovered by shredding the paper and revealing items. Along with standard attacks such as punching, kicking and jump attacks, Sketch can store up to three items in his inventory to help him overcome obstacles. Along with weapons such as bombs and knives which can also be used to destroy obstacles, Sketch can pick up iced tea to restore his health, and a fist that transforms Sketch into Super Sketch, dealing a powerful attack on all screen enemies. His pet rat Roadkill can discover hidden items and access areas that are too dangerous for Sketch to reach.

Sketch can also tear off the backdrop into a paper plane to throw at enemies, but this costs health and can also hurt Sketch if he’s not careful. In order to progress through the pages, Sketch will often have to either successfully solve a puzzle, or defeat all the enemies within that panel. Arrows will then appear, allowing Sketch to jump to another panel, with some areas offering multiple routes.

Sketch’s health is determined by a health bar, which is diminished when Sketch is damaged by enemies or obstacles. It will also diminish as Sketch punches through breakable objects or if he uses his paper plane move. If Sketch loses all his life, or falls down a bottomless pit, the game will end and Mortus will take his place in the real world.

However, the player can gain extra chances by clearing the first and second chapters, which will allow Sketch to resume from the beginning of the page should he die. Comix Zone is designed to be used with the 6-button gamepad: buttons X, Y and Z correspond to the three inventory slots Sketch has. If used with a 3-button gamepad, button C cycles through the items, and button A activates the item. Button C on a 6-button gamepad is used for a custom action, blocking by default – on a 3-button gamepad, Sketch blocks automatically.

Interesting Stuff about the music

The European release of the Mega Drive and the Windows PC versions of the game included the Sega Tunes: Comix Zone soundtrack, which contains “enhanced” music taken from the game’s soundtrack and played by a full rock band. The soundtrack was later released in North America under the Sega Tunes label. 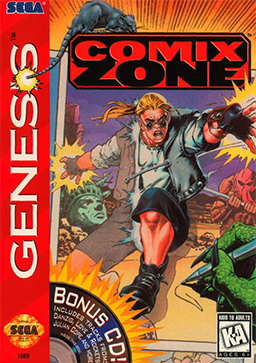